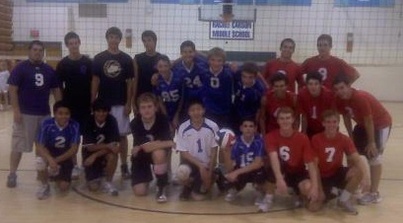 To find out more about the Fairfax County teams, please click on the individual team tabs.  The schedule is posted on the High School Boys' League page.  For more general information please contact Frank McDonough at frankm204@hotmail.com. 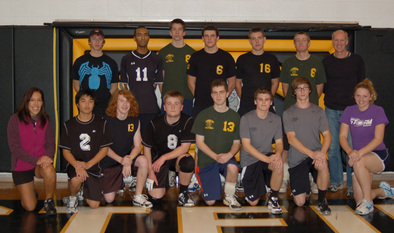 The name of the league shall be the Northern Virginia High School Boys Volleyball League (NVHSBVL).

(b) To foster and promote participation in boys volleyball, with an emphasis on teaching the sportsmanship aspects of the sport.
(c) To obtain the addition of boys volleyball as a sanctioned varsity sport in the Northern Region of the VHSL.

(b) The league shall be governed by a Board composed of the Executive Committee members and a Coach and Team Representative from each member team.

(a) Member teams will be formed from players attending an individual VHSL Northern Region High School. Each team will be named for the high school area in which its players live. Executive Committee approval is required to add teams to the league.

(b) Hybrid teams, consisting of boys from multiple high schools, may be formed at the discretion of the Executive Committee when insufficient numbers of players are available in a single attendance area.

(c) At the Executive Committee’s discretion, teams from outside of the Northern Region may be added as associate member teams and their representatives may attend Board meetings for informational purposes, without voting rights.

(d) Home schooled boys that live within a specific high school area may play for the team that represents that school or a hybrid team. This paragraph is nullified if it conflicts with FCPS club rules.

(f) A majority vote of the Board is necessary to determine that a team is not in good standing and removed from the league.

(g) As a condition of its membership in the league, a team implicitly endorses and enforces the league By-Laws and Rules.

(a) The fiscal year of the League shall run from 1 July to 30 June.

(b) Each team shall pay a team fee to the League, the amount of which is determined by the Executive Committee. The Executive Committee will notify the team representatives of the fees payable by their team. If team fees are not paid within 30 days of date of such notice, the team will be deemed in default. Any team in default shall thereupon cease to be members of the League. However, any such team, upon payment of all unpaid fees, shall be reinstated starting on the date of payment. Associate member teams with proof of their own insurance can be assessed a reduced league fee.

(c) Team fees will be used to pay for county participation fees for use of facilities, insurance policies, match officials and other incidental costs of league administration as approved by the Executive Committee. All other team expenses will be borne by the individual team.

(d) Board members are entitled to one vote each and a simple majority of votes cast will decide the matter at hand. Board members unable to attend may send their vote via electronic mail or written message in advance to the League Secretary/Treasurer.

(e) Executive Committee elections shall be held each June. Votes will be taken at a Board meeting called a minimum 21 days in advance. Nominees will be solicited from the Board by the Communications Officer. The slate will be communicated to the Board a minimum of 14 days before the election.

Article 6. POWERS OF THE LEAGUE

(a) The Board will govern the affairs of the League in all things and make or cause to be made for the League, in its name, any kind of contract which the League may lawfully enter into, and save as herein after provided, generally may exercise all such other powers and do all such other acts and things as the League is, by its constitution and by-laws or otherwise, authorized to exercise or do. Without limiting the generality of the foregoing, the League is empowered to:

(i) establish, amend and enforce the by-laws;

(iii) suspend or revoke membership in the League.

(b) The Commissioner shall be charged with the responsibility of the day to day political, financial and administrative decisions of the League. The Commissioner may appoint and chair a Disciplinary/Protest Committee as required.


Article 8. DUTIES OF THE EXECUTIVE COMMITTEE

(b) The Secretary/Treasurer shall keep full and accurate accounts of all receipts and disbursements of the League in proper books of account and shall deposit all monies or other valuable effects in the name and to the credit of the League in such bank or banks as may from time to time be designated by the Executive Committee. He/she shall disburse the funds of the League under the direction of the Commissioner, taking proper vouchers thereof and shall render to the Commissioner at 2 month intervals or whenever required of him/her, an account of all the transactions as treasurer, and of the financial position of the League. He/she shall also perform such other duties as may from time to time be determined by the Executive Committee.

(e) Each Executive Committee member is responsible to enforce the League By-laws and is empowered to make interpretative decisions when required on an as needed basis.

(a) Rosters will be submitted to the League Coordinator no later than September 15th each year.  No changes to the roster will be allowed after September 15th without Executive Committee approval. Exceptions to these deadlines may be allowed for associate team members.

(b) Players are not transferable from team to team except as determined by their enrollment into another high school or as approved by the Executive Committee.

(a) The NVHSBVL is established as a vehicle to allow boys that are attending high school in the VHSL Northern Region access to competitive volleyball with the focus on establishing boys volleyball as a sanctioned varsity sport in the near future.

(b) Game rules are established by the VHSL. Currently these rules are mirrored after the National Federation of High School State Associations rules.  Any exceptions to these rules will be approved by the Board and clearly described below:

(i) All League matches will be free of charge for spectators.

(ii) Concessions may be sold during matches at the discretion of each host team, with prior permission of the host school.

(iii) To reduce costs, uniforms will not be provided by the league, but are the responsibility of the individual teams. Any costs incurred for uniforms will be managed at the team level.

(1)   Uniform shirts, at a minimum, shall have player numbers on the front and back of the garment, easily visible to the referee.

(2)   Uniforms within an individual team should be similar to one another with respect to color with the exception of the libero shirt, which shall be a contrasting color to the rest of the team players.

(3)   Shorts should be athletic shorts with no buttons or zippers for safety reasons. There is no requirement for each player's shorts to be matching in color, although that is preferable.

(4)   Only court shoes are allowed on gym floors.

(a) Regular season: The League Coordinator shall assign all matches. Scrimmages in pre-season may be arranged by the individual teams.

(b) Team practice shall not begin before August. League play shall start in September and end in mid November. This time period may include a playoff format at the Executive Committee’s discretion.

(a) A match protest must follow VHSL rules for the affected match.

(b) The League Commissioner must be notified of the protest by the protesting party in writing or by electronic mail within 24 hours of the incident.

(c) Any player who is under eligibility or disciplinary review will not play in another League match (regular or playoff) until the Disciplinary/Protest Committee has reviewed the case, and rendered any disciplinary actions that it deems appropriate.

(d) All decisions by the Disciplinary/Protest Committee with respect to protests and suspensions are final and binding.